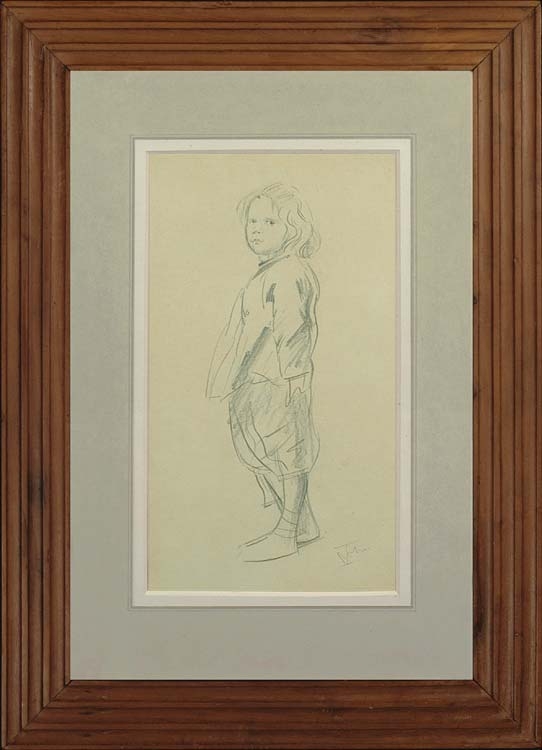 Portraiture seems to have existed in the form of sculpture and three-dimensional representation before it was practised in painting. In ancient Egypt the depiction of named individuals (for example the painted statue of Nenkheftka, 5th Dynasty, c. 2450 BC, British Museum) is generally in stone and generally idealized, although the addition of naturalistic details occurs at various times The same is true of ancient Greece, and it was only during the 4th century BC that naturalistic portraits began to appear – these were also sculpted, although it is clear from written evidence that painted portraits were common (at least during Pliny’s life, in the 1st century AD).

The earliest surviving portrait paintings seem to be Roman funerary portraits of the 2nd -4th centuries AD, which have been preserved in the dry climate of Egypt; these carry a sense of connection with a real individual, although they still share traces of generic ‘improvement’ in their large eyes and refined features. After these, naturalistic portrayal was superceded for several centuries by the standardized features usual for religious figures, and only began to re-emerge in the Gothic era, through the work of, for example, Theodoric of Prague and his strongly individuated portraits of kings, knights and popes.

Depictions of secular figures grew to some extent out of the donor portraits within altarpieces; the portrait of the chancellor in Jan van Eyck’s The Virgin and Child with Chancellor Rollin is hyper-realistic in its mimicking of the folds of ageing skin, the muscle and bone structure of the face. Van Eyck, born in the last decade of the 14th century, marks a significant stage in the development of portrait painting; his facility with the innovatory technique of oil painting allowed for an extraordinary degree of realism in the modelling of face and features by means of chiaroscuro and colour (see the two male portraits, early 1430s, National Gallery). The earliest comparable portraits in Renaissance Italy are those, forty years later, of Antonello da Messina, who had learnt from Flemish masters.

The portrait paintings of the High Renaissance, from the 1470s to the 1550s, flowered rapidly from this already sophisticated level into the idealized naturalism of Leonardo’s paintings, his drawings from life and anatomical studies, and his explorative series of grotesques. Raphael’s portraits, especially that of Baldassare Castiglione (c.1514-15, Musée du Louvre), and Titian’s (including Man with a sleeve, c.1510, National Gallery) combine psychological perception with a timeless and monumental quality. They lead, via Tintoretto and Caravaggio, into the Baroque age, when secular portraiture at last achieved a greater output than religious works, and artists such as Velasquez and Rembrandt combined a virtuoso painterly technique with soul-baring expressiveness and dispassionately truthful reporting.

The functions of portrait paintings varied slightly over time. Before, say, the 16th century, the primary purposes were, roughly, to honour and advertise the powerful and their families; to memorialize the dead; and to acquire merit by association for the afterlife. From the mid-Renaissance onwards, more and more ‘ordinary’ people were depicted, from professionals to tradesmen; memorializing the dead became a side effect of painting the living; and donor portraits gradually disappeared. Psychological truth became as important as aggrandizement – although paintings of the rich, powerful and famous are still today the largest category of portrait. Self-portraits proliferated; Rembrandt’s total of more than ninety, painted throughout his life, are a milestone in the increasingly objective (rather than idealizing) gaze of the artist. However, it took some time for peasants to be depicted with the same objective acuity; earlier portraits dwelt either on their grotesque qualities (e.g. those of Adriaen van Ostade, Jacob Toorenvliet, David Teniers) or their picturesque costumes (Tiepolo, Watteau), and often shaded from true portraits into genre paintings. Probably the first work to represent working class sitters dispassionately, with dignity and wholly without condescension, is the Heads of six of Hogarth’s servants, c.1750-55, Tate. Studies of servants did form a small sub-class from this point, but usually they were indissolubly associated with their particular activity or task.

Portrait paintings from the 18th to the 21st century have only really varied in their costumes and settings and in their stylistic progenitors, since Hogarth’s servants, Rembrandt’s own face from the age of about 50 and Velasquez’s Juan de Pareja might in some ways have been painted at almost any time in the last 300 years. However, every art movement from the Impressionists onward has produced its own technical variants, from Renoir’s portraits (Victor Choquet, Fogg Art Museum; Monet, Musée d’Orsay), through Art nouveau (Klimt’s Adéle Bloch-Bauer, Neue Art Gallery, NY), Vorticism (Wyndham Lewis’s T.S Eliot, Durban Art Gallery), Cubism (Picasso’s Woman and pears: Fernande Olivier, MOMA, NY), Surrealism (Magritte’s Clairvoyance: Self-portrait, Private Collection), Op Art (Richard Anuszkiewicz’s Self-portrait, Private Collection), and Photorealism (Chuck Close, Self-portrait/Color 2007, jacquard tapestry, PaceWildenstein), to the YBAs (Marc Quinn, Self, National Portrait Gallery) and Post-Modernists (Cindy Sherman’s Self-portraits).