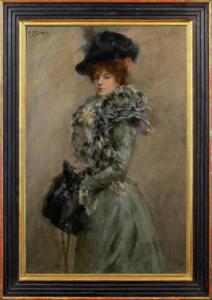 The earliest art we know contains representations of human beings: Palaeolithic paintings in the French caves of Lascaux have – amongst the many animals there – the figure of a man depicted c. 11-18,000 years ago, apparently having just killed a bison. We do not know the purpose of the painting; the man seems to wear a bird mask, and his spear is topped with a bird; the bison seems to have been gutted. This may represent a sacrificial ritual, or the record of an actual event; it may be an attempt to influence the gods for a successful hunt; it may illustrate a story, or be purely decorative. Pre-dynastic Egypt (c. 4,000-3,200 BC) also produced depictions of figures (by now both modelled and painted), which include gods or goddesses as well as men engaged in their daily activities.

From the very beginning, then, figure paintings have depicted both everyday scenes and something more otherworldly. During the various Egyptian dynastic periods the technique of figure painting was carefully honed, and increasingly directed towards the ritual of escorting a dead person safely from this world to the next. Rules were followed which ensured that each part of the body was depicted in its clearest form, to help the departed spirit to recognize its own body: the head shown in profile, the body from the front, the legs from the side. Depth and perspective were ignored, and the status of the person indicated by his or her relative size, the gods being largest of all. Symbolism through the use of colour was also employed. In paintings from the tomb-chapel of Nebamun, 3.5 thousand years old and now in the British Museum, we can see Nebamun, a minor accountant, hunting by boat along the Nile amidst minutely rendered and breathtakingly naturalistic birds, fish, butterflies and a cat, in a triumphal assertion of his eternal life and youth.

By contrast, the figure paintings which have survived from ancient Greece tend to be those on pottery vases and dishes (black figure from 7th-5th centuries BC; red figure from 6th-3rd). Here too men are shown interacting with heroes and gods; gradually the use of perspective, foreshortening, emotion and anatomical detailing increases, and domestic scenes, rather than mythological, grow in number. They are powerfully realistic for line drawings, and were frequently signed by the artist. Painting seems, in fact, to have been more highly thought of than sculpture, both in ancient Greece and Rome; but easel paintings themselves have not survived, and in the Roman period we are dependant on frescoes to learn about two-dimensional art. These include mythological scenes, startling in their technique and sophistication: for instance, Hercules discovering his infant son Telephus (Museo Archeologico Nazionale, Naples), a fresco from Herculaneum which may reproduce several Hellenic sources from Pergamum, and which makes up in the treatment of the figures for any disparities of composition.

Early Christian art grew from its Roman counterpart, and was fairly realistic in pose and gesture; Byzantine art, although also sophisticated, was prone to hieratic and stylized depictions of the figure. This influenced mediaeval religious art, producing altarpieces in which figures were scaled according to their importance, interacted very little with other characters, and were generally depicted in a flat and shallow space, upon a gold ground. Much secular art of the mediaeval period has been lost, leaving the impression that the arts were almost completely focused to religious ends; for instance Giotto’s cycle of paintings in the Arena Chapel, Padua (1300-05), which looks towards the Renaissance in its break with Byzantine formality, its use of foreshortening and depth, and most of all its representation of emotion. However, there are also striking non-religious figure paintings, for instance Ambrogio Lorenzetti’s complex and detailed frescoes of Good… and Bad government in the Palazzo Pubblico, Siena (1338-39), which show fascinating vignettes of mediaeval life in which movement and pose have been studied. As the Renaissance dawned and progressed, artists built upon these earlier works to show the human figure in a realistic, perspectival space – the sacra conversazione, where the Madonna, saints and donors interacted with each other in a naturalistic manner, and where their anatomy – although idealized – was based closely on studies from life. Mythological scenes and group portraits became increasingly popular, and the categorization of ‘figure painting’ might apply equally to Titian’s Bacchus and Ariadne (National Gallery, London), Michelangelo’s Last Judgment in the Sistine Chapel, and Raphael’s Portrait of Pope Leo X with two cardinals (Galleria degli Uffizi).

In the progression of art from Egyptian tomb and classical paintings through the Middle Ages and Renaissance, there were always scenes of ‘low’ life, as well as uplifting religious and allegorical subjects or portraits of the influential. These pictures of peasants working, country fêtes, craftsmen, drinking scenes, &c., developed into the genre paintings of the 17th century (the majority Dutch), which were collected enthusiastically by patrons. They were produced by artists of the calibre of Brueghel, van Ostade (Carousing peasants in a tavern, c165, Munich), Vermeer (The milkmaid, c.1658, Rijksmuseum) and Teniers, and focused on unidealized images of the rural and urban poor, working and at riotous leisure. Caravaggio’s great altarpieces might be seen as the religious versions of these figure paintings, for which he used models (often to the scandal of his clients) from the gutters of Rome, Naples and Malta, every wrinkle and flaw of whom he depicted with cinematic realism (e.g. the Madonna of Loreto, S. Agostino, Rome). Genre scenes ironically spawned prettier versions, and artists of 18th century France, such as Boucher (Shepherd piping to a shepherdess, 1750, Wallace Collection), Fragonard and Watteau, produced enchantingly idealized Rococo pastorals of porcelain peasants at play in luxuriant parks.

In the 19th century a Caravggiesque realism made a return in diverse ways: through the work of the Pre-Raphaelites, who painted contemporary, literary and even Biblical scenes from unidealized models posed in landscapes painted on the spot, making full use of the new chemical pigments which gave them a novel depth of saturated colour (Millais, Christ in the house of his parents, 1849-50, Tate; Holman Hunt, The awakening conscience, 1853, Tate). It returned in the work of the French Realists, such as Courbet, who produced large figure paintings of peasant scenes in his native Ornans, treating them as though they were morally elevated and classically laden history paintings (Courbet, A burial at Ornans, 1849-50, Musée d’Orsay). The Impressionists took a further route to realism, treating the human figure as an object which could be caught under specific circumstances of light, climate and time of day, just as much as a building or a tree. At the same time they portrayed the urban middle classes within a landscape that was changing under industrialization, producing a portrait of 19th century life at the railway station, against a backdrop of chimneys (Monet, Effet d’automne, Argenteuil, 1873, Courtauld Gallery, London) and in the busy streets of Paris. In the 20th century, Picasso and Braque took this pursuit of realism in figure paintings even further, by using Cubism to portray the body in motion (the most famous instance is probably Marcel Duchamp’s Nu descendant un escalier no. 2, 1912, Philadelphia Museum of Art).